Happy weekend, everyone! I meant to get this post out last night, but I must confess that I got seriously distracted by Pinterest. I don’t know if that has ever happened to any of you, but it is a truly delightful way to spend what was meant to be about 15 minutes but somehow became about 2 hours!

So this morning I got up, rarin’ to go, and I am going to share this really great recipe with you before I get sidetracked by something else!

I found a recipe that sounded really good on Picky Palate (one of the umpteen blogs I follow… and yes… “umpteen” is a real number) for a Cheesy Chicken and Pesto Pasta Bake, but I discovered that Pesto is one of those things that is not normally stocked in my house. I have no idea why… I am a big fan, and even though it is green, Mike seems to be okay with it too. In any case, the pesto had to be made before the rest of it. And I figured, if I am making basil pesto, I might as well throw some of that fresh spinach that I have in there, too! 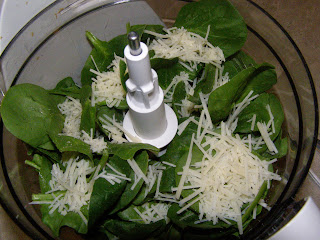 So I put about a cup of spinach leaves in with around 2 cups of basil leaves (stems removed), a handful of shredded parmesan, 4 cloves of garlic (I really love garlic) and one lemon, zested and juiced, into a food processor. I pulsed it until it started to look “pesto-y”, and then drizzled in about 1/2 cup of olive oil until I found the consistency that I like. Then I put in a little salt and pepper until it tasted JUST RIGHT. Very scientific, I know, but that is mostly how I cook.

Next thing I noticed was that the recipe called for shredded chicken. I didn’t have shredded chicken. But I did have some frozen chicken breasts, so I poached those and then shredded them. I don’t know if you have ever shredded your own chicken, but there are many theories on this. Most people say to use a food processor, but I find that my chicken gets “gummy” and sticks together, so I do it the old-fashioned way: two forks and a lot of patience.

Once the chicken was shredded and the pesto made, we were ready to rock! I cooked up a package of spaghetti, drained it, and mixed in the pesto, some garlic salt, milk, a little more salt and pepper, and the shredded chicken. 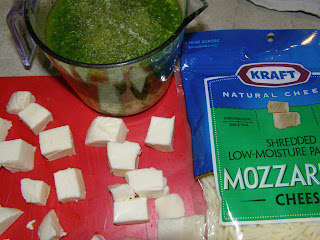 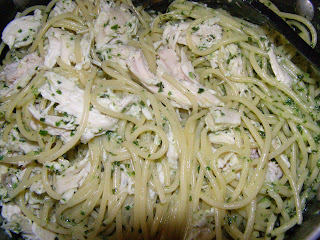 Then I put half the chicken and pasta mixture in a lightly greased 9×13 pan, then layered fresh mozzarella in, and topped with the remainder of the pasta. Then some shredded mozzarella cheese on top (because there is no such thing as too much cheese), and baked it at 350 for about 25 minutes. 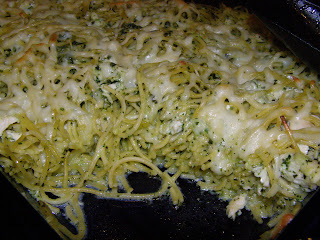 Super-tasty, and many thanks to Picky Palate for the recipe! It is shared below, as it appears on their site:

Save this recipe to ZipList