Happy New Year!  I hope everyone has recovered from the revelry of last night and is ready to take on 2013!

Personally, I am not big on resolutions.  I used to resolve to lose weight, exercise more, save money… but then life always happened and something would go horribly wrong.  And since I hate to fail at anything (a sad but very true character flaw!), I have stopped making resolutions.  Oddly enough, this works quite well for me.  I finished 2012 seventeen pounds lighter than I started it, and I achieved some personal goals of traveling to Switzerland and playing more tennis.  A LOT more tennis. This year, I hope to keep up the good work.  More traveling, more healthy living, and more balance of work/life.

That said… I do believe I promised you some home-brew fun on the last post, and I am ready to deliver!  One of Mike’s DIY hobbies is brewing his own beer.  This started when his sister, Beth, and her family provided him with the Mr. Beer home-brew kit for Christmas in 2011.  He brewed his first batch of beer from the prepackaged kit (it included a can of wort and instructions) and it was HORRIBLE.  Mike is not a quitter, and so he decided there were some things about the kit that he thought he could do better… and it snowballed from there!  He is now set up to brew one 5-gallon batch at a time, but he has a larger brew pot on the way, so he will be able to increase that to a 10-13 gallon batch.

Right now, we have a Bee Cave IPA that just (and I mean JUST) got bottled, and a blackberry ale that is in the fermenter.  I like fruit in my beers, and last year Mike made me a raspberry ale that is a clone of the Ruby that they make at McMenamins.  So yummy!  So in the summer, we went blackberry picking and froze them, and that is what he has used in this batch of blackberry ale.  I am very excited to try this beer… the color is fantastic!

Currently, Mike brews his beer in the kitchen.  I have recruited him to help me with this post, since I am not as familiar with the process and the language of brewing as he is. 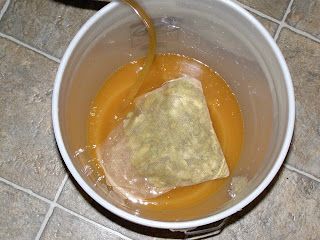 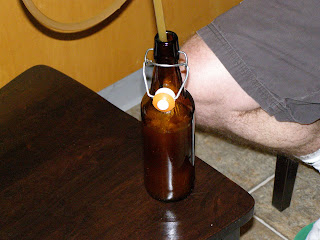 So… that is the home-brew adventure!  This particular batch was bottled in 16 oz and 12 oz bottles.  It is the equivalent of fifty-three 12 oz bottles of beer, or just over 2 cases.  The blackberry ale will make a little more, maybe two and a half cases.

If you have questions about the process, recipes, anything… just drop a comment and I will get a Q&A going with Mike.